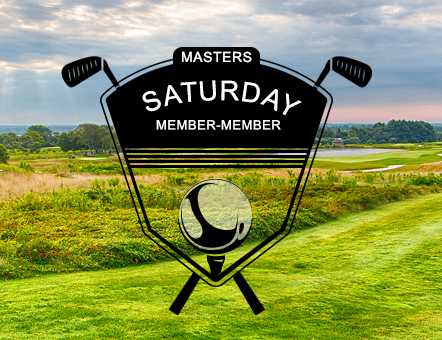 Saturday April 8, marked the day of the 1st Newport National Member-Member event of the 2017 season. The theme of the day was the Masters tournament, which typically marks the beginning of the golfing season in New England.

It was a frigid morning with an icy sea breeze blowing in off the Sakonnet Bay, which was made a bit warmer with the return of the great companionship of Newport National membership. Members new and old, braved the elements to complete the round with flying colors. The play format was a unique blend of “best combined score” while using the “Callaway System” to determine each player’s handicap for the day. The Callaway System is best used when players do not have an official handicap, or in this particular case, when it is early in the season and players may not competing at their official handicap number leftover from last season.

The tournament was highlighted by some fine play from Jim and Cheryl Pryor, who took home the first place prize with a sparkling 4 over par 148 net score. Their 148 total just nipped new members Jared Furtado and Brian Alber, who also shined with a 149 total. Following the round, members gathered at the Orchard Bar and Grill for an Augusta National inspired menu featuring items that are found only at food stands located on Augusta National grounds. After a terrific meal and a few delicious cocktails fresh from the NNGC bar, everyone was ready for “moving day” at the Masters!

Next up is the Member’s ABCD outing, which combines teams and players of all abilities. We are all hoping for some warmer temperatures and another exciting finish, as we embark on another fantastic golf season here at Newport National.

Congratulations! Kim Hall had a hole-in-one on Hole #4 using an 8 iron this past…