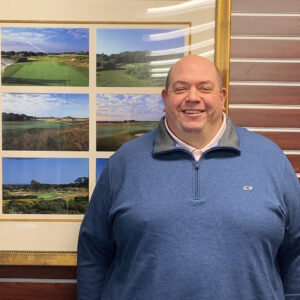 Simon Harootian joined Newport National Golf Club as the Superintendent in 2020. Simon began his agronomic career over 20 years ago. Golf course maintenance has been a long passion of Simon’s since he first helped construct Cyprian Keyes Golf Club as a teenager. Prior to Newport National, Simon was the Superintendent at Meadow Brook Golf Course. His other work experience includes Quidnessett Country Club, Country Club of New Bedford and Point Judith Country Club. These clubs have provided Simon with a wide array of experience on both private and public courses, thus allowing him to maintain the turf to superior conditions. Along with maintaining high turf quality on courses, Simon has partnered with professors at the University of Rhode Island and the top chemical companies to further the progress of the “Green” movement by doing research with biological treatments and cleaner, safer pesticides. Simon’s efforts to maintain the golf course in an environmentally-friendly way has earned NNGC “Green” certificates with the Audobon Society and the Rhode Island DEM. After graduating from the University of Rhode Island, Simon moved to Middletown with his now wife Susan. He is excited to showcase his talents in the community he loves.

back
Copyright © 2022 Newport National Golf Club, LLC.
Back To Top