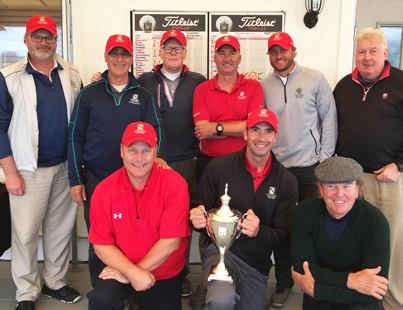 In the spirit of the Ryder Cup, the Newport National golf staff unveiled the new “National Cup” this past Sunday. The event is a new annual membership affair which pits the NNGC members who claim Aquidneck Island as their primary residence, against those members whose primary residence is “off island.” Head Pro, Andy Farrea, captained the 8 player “Islanders” team, and assistant pro, Pat Donnelly, captained the 8 player “Mainlander” team.

Andy Farrea’s Island team stormed off to an early 3-1 lead after the alternate shot matches, but the Mainlanders would battle and split the better ball match points to remain only two back at 5-3. The Islanders dominated the early individual matches and needed only one more full point for the victory with 4 matches remaining, but Mainlander member, Mike Rogers, sank a huge 8 foot putt on 18 to tie his match and keep his team alive. Islander member, Keith Hamilton, sealed the victory for the Island on the 18th hole with a 1 up victory in his match.

The event was extremely well received by everyone and is going to be an occasion that will be highly anticipated for next season. “We hope to grow this event each year, we don’t mind if it were to grow to 30 player teams,” says Head Pro and Island Captain, Andy Farrea. “Friendly competitive events like this are such a blast, it makes me want to get out there and tee it up!”

The Island team will reside as the National Cup champion until next October, when they will return to defend their title.

We Need Your Vote!