The Newport National Club Championship occurs once a year in the month of August with two separate divisions. The “Championship Division” is the gross division, played from the Black tee markers, and celebrating the club’s best overall golfer as its champion. The “Net Division,” is a fully handicapped division where players are given handicap strokes and is played from the Gold tees, celebrating the club’s best “net” golfer as its champion. All members have the opportunity to choose which division they would like to attempt to qualify for. 7 spots for match play are available in each division, with last year’s defending champion receiving a “bye” through qualifying and becoming the automatic 2 seed on the match play bracket.  The low 7 scores during the qualifying round advanced to the match play bracket with the opportunity to win 3 matches which would give them the overall championship. 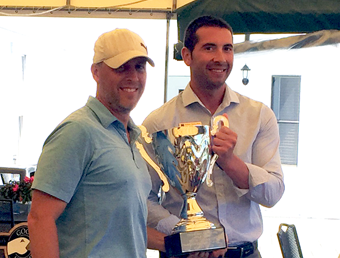 In the Championship Division, the finals were a 36 hole match between the two remaining contestants and is played from the Black tees which were pushed to the maximum yardage of the golf course, totaling over 7300 yards. Robert Goldman trailed 1 down through the first 18 holes, but rallied on the second 18 to defeat Francis Spinella 5 and 4. This was Rob’s 7th straight club championship win and he has been the only club champion since the inaugural club championship under Head Pro Andrew Farrea in August 2010. As the championship division winner, Mr. Goldman is celebrated as the overall Club Champion at Newport National.

In the Net Division, the finals were an 18 hole match played from the Gold tees from a yardage of about 6400 yards. Scotty Murray, a past Net division champion, had the match in his grasp with a 2 up lead with just 4 holes to play. But Mark Snyder was able to rally and win 3 out of the final 4 holes to win the match 1 up and claim his first Net division title at Newport National. Mark showed great mental toughness by winning all of his matches by the slimmest of margins, claiming 1 up victories all 3 rounds of the tournament matches.

Thank you for Voting Us #1

Thank You for Voting Us #1: We would like to extend a sincere thank you to…