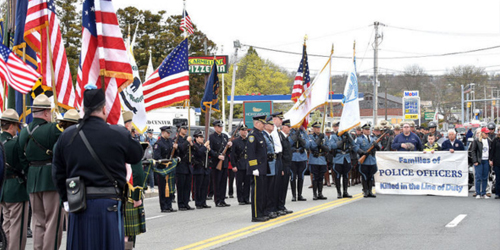 Ian and Charlotte McGregor did not let the unseasonably cool weather and threat of rain Sunday stop them from bringing their two sons, Lochlan, 3, and Cormac, 1, to the 33rd Aquidneck Island National Police Parade.

They were there to pay tribute to East Providence Police Capt. Alister C. McGregor, who was shot and killed during a training exercise he was conducting on Dec. 27, 2001. An officer playing the part of a sniper inadvertently failed to clear a rifle of ammunition and shot McGregor while he was aboard a school bus that was part of the exercise.
Ian McGregor was 19 when his father was killed. He joined the Newport police force six years later. His brother Clifford McGregor is a member of the Middletown Police Department, and his brother Derek McGregor serves with the Connecticut State Police.

Ian McGregor and his family marched in the parade Sunday with a group of people behind a banner announcing them as families of police officers killed in the line of duty.
“After my father’s death, there was such an outpouring from other officers. It was like family,” McGregor said while standing near the reviewing stand on Washington Square after walking the 1.7-mile parade route, which began in Middletown and ended in Newport. While he’s attended the police parade before, this was the first time he participated in it, he said.

The Aquidneck Island National Police Parade has been held, with a couple of breaks, since the 1970s. It is meant to honor members of law enforcement who have died in the line of duty. In 2015, 123 officers nationwide died as a result of injuries suffered on the job.

Parade-goers got a reminder of that when the contingent from the Massachusetts State Police marched past the reviewing stand. The parade announcer asked for a moment of silence to honor Massachusetts State Trooper Thomas L. Clardy, 44, a father of seven who was killed when a car ran into the back of his police cruiser while he was conducting a traffic stop on the Massachusetts Turnpike on March 16.

The cloudy, cool weather seemed to hold down the number of spectators along the parade route, but the dozens of people watching from Washington Square applauded loudly as McGregor and the other relatives of deceased officers approached. Maria Sanchez of Newport held aloft a handmade sign that read: “Rain or shine, we support you for your service. God bless you all.”

Police in her hometown of Brooklyn, N.Y., came to the aid of her mother once, and she has never forgotten what they do for people who often can’t help themselves, she said.

“I think they do a great job, and I appreciate all the work they do,” Sanchez said. “Recently they’ve been getting knocked around a lot.”

The marching honor guard from the police department in Hackensack, N.J., was a favorite of the Washington Square crowd. Under the direction of Sgt. Jim Smith, the guard performed a complex set of precise maneuvers in front of the reviewing stand.

“It used to be called the goose step, but now we call it the death march because we perform it at funerals,” Smith said.

Carlin and Jim Bass of Georgia were in town for the weekend visiting their son, who is stationed here with the Navy. They noticed marching units gathering in the parking lots surrounding their hotel on West Main Road in Middletown, so they and their two grandchildren took seats on the wall in front of the Hampton Inn & Suites, where the parade began.

“We thought the kids would enjoy this,” Carlin Bass said.
The Rev. Frank O’Loughlin, pastor of Jesus Saviour Church in Newport and chaplain of both the Newport and Middletown police departments, offered an invocation before the parade began.

“Lord, we ask you to bless this parade in honor of the men and women who serve and protect us daily,” O’Loughlin prayed. “Brave men and women who risk their lives to keep us from harm, protect our homes and keep our streets safe.”

Pearl Emerson, a junior at Rogers High School, kicked off the party with an a cappella rendition of the national anthem that drew sustained applause from those gathered near the starting line. Among those present was Dan Dvorak, a retired captain from the Newport police force who was named chief of police in Cambridge, Md., a little more than a year ago. Dvorak and six members of his department marched in the parade.

“I learned a lot in Newport and now I’m applying it all in my new job,” he said.

The Portsmouth police contingent included a float bearing a large rendering of the proposed new police station that will be before voters this November.

“We’re kicking off our campaign,” Portsmouth Police Chief Thomas Lee said before the start of the parade.

Rochelle Vinton of West Warwick pointed out her husband, Stephen, a Rhode Island State Police K-9 officer, to their two sons, William, 2, and Paxton, 7 months. “Look, it’s Daddy,” Vinton said as her husband and his trained dog, Nacoma, passed by.

The Viking Riders of Rhode Island honored Lee, Middletown Police Chief Anthony Pesare and Newport Police Chief Gary Silva with plaques inscribed: “In honor of all your officers past and present for their constant loyalty, our sincere thanks for all your support.”

“I think it’s important not to miss this one,” Seveney said. “The cops put it out there for us. They put their lives on the line every day.”