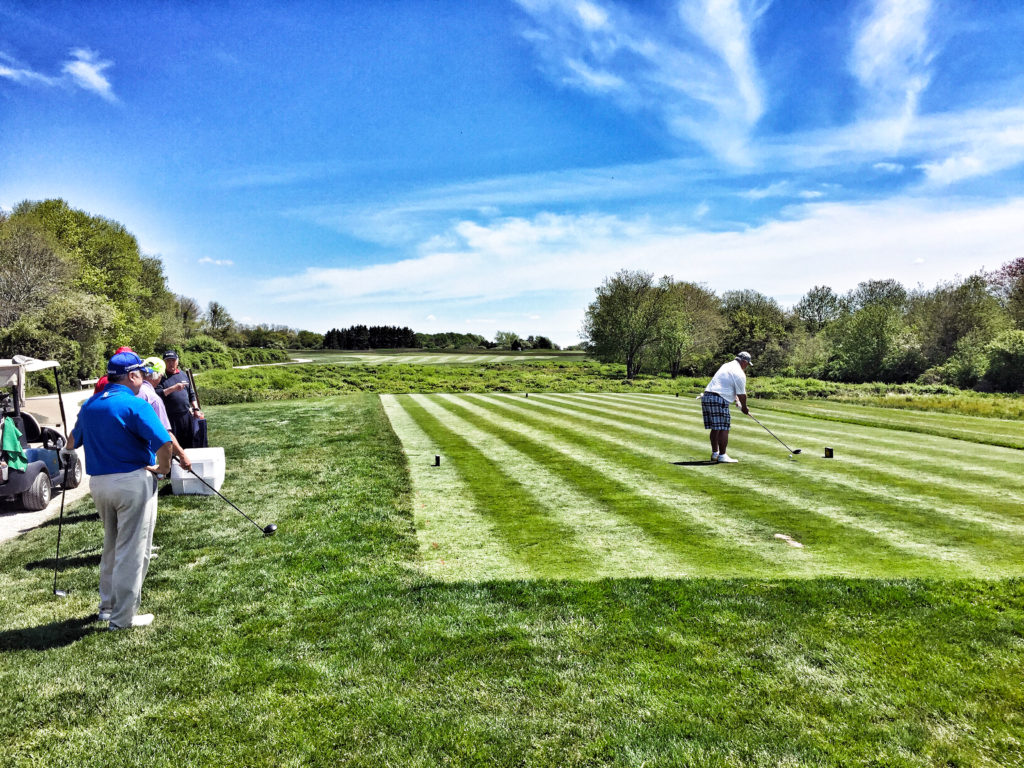 MIDDLETOWN – Tyler Cooke calls it brotherly love.
He and his brother-in-law, Bobby Leopold, both are top players. Put them together as a team and they become all but unbeatable. At least they have been in the last two years in the RIGA Four-Ball Championship.

The two won the event convincingly for the second year in a row on Tuesday when they combined for a 7-under 65 at Newport National. With their 62 on Monday at Carnegie Abbey, that gave them a 36-hole total of 16-under 127 and a five-stroke victory over the teams of Kyle Hoffman and Ryan Pelletier, Billy Forcier and Michael Philipp and Dave Carvara and Kevin Silva.

While they did not match their 59-60 performance and 13-stroke win last year, Cooke and Leopold remained extremely impressive. “We haven’t made a bogey in two years,” Cooke pointed out.

In the first round, Cooke led the way with seven birdies. At Newport National, Leopold, a two-time State Amateur champion, stepped up his game. “I helped him some, but he played terrific, especially on the front,” Cooke said of his brother-in-law.

The two began with a two-stroke lead and any doubt about whether they would be able to defend was dispelled before the front nine was finished on a cool, overcast day which only added to the European feel of the beautiful Newport National layout.

Leopold eagled the 495-yard, par-5 eighth hole. “I had 230 in but it was straight into the wind,” Leopold said. “I thought I could hit three-wood.” He did, to 10 feet, and made the eagle putt. He then birdied nine, as well, and the team was one its way to another title.

Silva and Carvara had a 65, Hoffman and Pelletier 66 and Forcier and Philipp a 68 to get into the second-place tie. 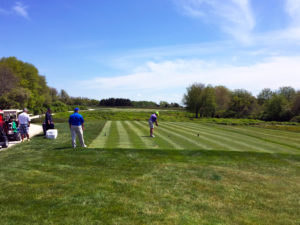 Hoffman and Pelletier, who won this event in both 2013 and ’14, were helped when Hoffman holed out a wedge for an eagle on the 396-yard par-4 15th. But that team hurt itself in the area where it usually excels, the par-5s. “We didn’t birdie any of the par-5s,” Pelletier said. “That’s not us.”

State Amateur champion Silva ran off three straight birdies on the back side to boost his team. That came after his partner, Dave Carvara, had made three birds on the front. Forcier pulled his team into the tie for second when he knocked his approach on the closing hole within three feet and birdied.

While Leopold and Cooke took the tournament title, the biggest winners of the event could end up being the state’s golfers.

Among those welcoming the players for the two-day tournament was the course’s new owner, John Pereira. He had great news for the RIGA and for all golfers. He has plans to bring Newport National to a stature among the top facilities in the state.

From the day it opened 14 years ago, the Newport National layout, designed by Arthur Hills and Drew Rogers, has drawn raves as a Major League course. The more than 200-acre property on a former nursery farm and orchard can play as long as 7,200-yards. With views of the Atlantic Ocean and the Sakonnet passage, it is very much in the links style of courses in Ireland and Scotland. GolfWeek put it on its list of the top 20 new courses in the country. There even were plans for a second course designed by Brad Faxon.

However the owners ran into financial problems and the course has been in receivership for more than a decade. The club, once valued as high as $12 million, was purchased for $3.7 million according to real estate records, by a company headed by Pereira.

Pereira is a Massachusetts resident who has a home in Middletown. He talks about his love of the game – “I’m a high handicapper, not a player like we have here today,” he said. “I’ve made my money. As my daughter says, this is my passion project.”

He spoke about how he is hoping to add a driving range on property across the street from the course and built a true clubhouse, something that was never done by the original owners because of financial issues.

The course is public, but because of its uncertain situation has not always been available for statewide events. Bob Ward, the RIGA’s executive director, related how Pereira went out of his way not only to host the Four-Ball with Carnegie Abbey but make everyone feel welcome, as well.

“It’s a great course,” Ward said. “We’d welcome the opportunity to have events here on a regular basis.”

Round 1 Recap
By Paul Kenyon

PORTSMOUTH – The bad news for Tyler Cooke and Bobby Leopold is that they did not repeat their history making performance of a year ago in Monday’s opening round of the RIGA Four-Ball Championship at Carnegie Abbey.

The good news is that they came pretty close. They came so close, in fact, that they ended up in the same spot they were last year, leading the tournament.

The pair “settled” for a 9-under 62 to earn a two-stroke lead after the first day of the two-day event. Last year, the two became the first players in association history to post a 59 in competition at Quintanisset. They followed that up with a 60 in the second round at Connecticut National to win the event by 13 strokes.

Understandably, someone asked the two as they headed to the scorer’s table after their round whether they had another 59.

“It could have been,” Leopold responded. “Tyler played really well.”

On this day it was Cooke who carried his brother-in-law along with him. Leopold is a two-tome State Amateur Champion and a threat in any tournament he enters. Cooke, whose sister Taylor is Leopold’s wife, keeps getting better and better He turned in his best performance yet on Monday with seven birdies. Cooke spent his first two years at the University of Connecticut as a defenseman on the school’s hockey team. This past year, he switched to golf and saw limited action on the Huskies golf team.

It does not look as if Cooke and Leopold will win by 13 this time. A beautiful day on Aquineck Island led to a host of good scores posted by many of the association’s best players. It also included an ace by Rob Goldman on the 13th hole at Newport National.

The new team of Billy Forcier and Mike Phillipp made its presence known with a 64 that included eight birds, one bogey and a three-putt par. Forcier recently returned to Rhode Island competition after spending several years in New Hampshire and Phillipp has switched over after competing in Massachusetts events.

Three teams posted 6-under 65s. They are the combinations of Jamie Griffiths and Trevor Wellin, veterans Rob Grossguth and Norm Levesque and collegians McKinley Slade and Matt Costaregni.

The new team of Griffiths and Wellin posted a 65 that included seven birdies. They were unhappy only because they recorded a six on the par-5 first hole. Griffiths has played in the event for years with fellow Wannamoisett member Charlie Blanchard.

“Charlie turned pro so I had to find a new partner,” Griffiths said. Wellen recently switched his membership from Quidnessett to Wannamoisett and was happy to combine with Griffiths.

Grossguth and Levesque, two guys from West Warwick, also are a relatively new team. Grossguth played for years with Jamie Lukowicz, last year’s RIGA player of the year before moving over to join fellow West Warwick great Levesque. Those two combined for a bogey-free 65, which included birds on three of the par-5s.

The college kids, Slade and Costaregni posted their 65 despite a pair of bogeys on par-3 holes. They made up for it with eight birdies.

Two-time champions Kyle Hoffman and Ryan Pelletier are third with a 66 but they, too, spent more time talking about their one bad hole than the seven birdies they made.

“We both played well. We both might have been under par on our own ball,” Pelletier said. “But the 16th really hurt us.” The two both made double-bogey six on that par-4 as each hit into a hazard. The 66 tied them with the team of Jay Barrow and Chris Chartier. That team’s work included an eagle on the par-5 15th.

State Amateur champion Kevin Silva and his partner, Dave Carvara, were next at 4-under 67 in a tie with the teams of Will Hall and Tom Carroll and Wes Armstrong and Jeff Maher.

Others in red numbers including the teams of Tom Acciardo and baseball Hall of Famer Mike Schmidt, a former RIGA Senior champion who is a member at Carnegie Abbey. They had 69. RIGA Hall of Famers Paul Quigley, with Kevin Blaser, and George Pirie, with George Cidale, both were in the group at 68. Also at 3-under was four-time Amateur champion Brad Valois, who combined for the first time with his frequent caddie Michael Boyd, and three-time Amateur winner Mike Soucy and his partner, Jim Colucci.

The low score among those who were at Newport National was a 2-under 70 by the team of Goldman and Andrew Logan. It included the year’s first hole-in-one in RIGA by Goldman, using an eight-iron on the 150-yard 13th.